Harry Potter and the Order of the Phoenix (Part-5)

Dark times have come to Hogwarts. After the Dementors' attack on his cousin Dudley, Harry Potter knows that Voldemort will stop at nothing to find him. There are many who deny the Dark Lord's return, but Harry is not alone: a secret order gathers at Grimmauld Place to fight against the Dark forces. Harry must allow Professor Snape to teach him how to protect himself from Voldemort's savage assaults on his mind. But they are growing stronger by the day and Harry is running out of time.

These new editions of the classic and internationally bestselling, multi-award-winning series feature instantly pick-up-able new jackets by Jonny Duddle, with huge child appeal, to bring Harry Potter to the next generation of readers. It's time to PASS THE MAGIC ON .

Harry Potter and the Philosopher's Stone was J.K. Rowling's first novel, followed by the subsequent six titles in the Harry Potter series, as well as three books written for charity: Fantastic Beasts and Where to Find Them, Quidditch Through the Ages and The Tales of Beedle the Bard. The Harry Potter novels have now sold over 450 million copies worldwide and been translated into 78 languages.

I loved how the book is available at such an affordable price.!!
Also I got two beautiful bookmarks ^_^
(I love the Hogwarts one) 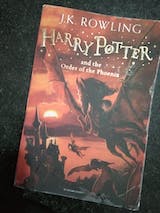 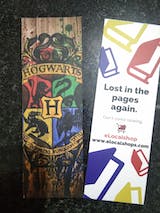 Harry Potter and the Order of the Phoenix (Part-5)

The oath of the Vayuputras (Paperback)

Legend of Suheldev: The King Who Saved India

The Secret Of The Nagas (Paperback)